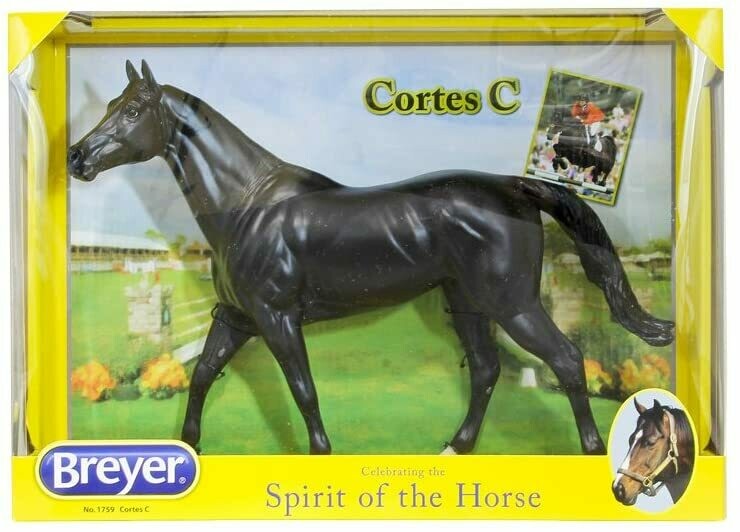 International Horse of the Year

Top show jumper Beezie Madden has been paired with Cortes C, owned by Abigail Wexner, since 2011. He is a 2002 Belgian Warmblood gelding. With wins at the Ruby et Violette WEF and the FTI Consulting WEF, they went on to clinch victory for the US in the Furusiyya FEI Nations Cup, and another in the The Longines King George V Gold Cup. At the 2014 Alltech FEI World Equestrian Games, Cortes was ridden in the "Final Four" competition, jumping four clear rounds and earning the "Best Horse" title, and Madden the bronze medal. In honor of Cortes C, Breyer will be making a donation to The Center for Family Safety and Healing, which supports victims of domestic violence.

Cortes C #1759 is made in Breyer's Walking Thoroughbred or "Carrick" mold #752, introduced in 2013 as part of the Premier Collection. This model was made by artist Susan Carlton Sifton.

Breyer Traditional Size Model Horses are renowned for the realism, authenticity and detailed accuracy of its models. Each Breyer model is expertly hand painted and finely detailed, and looks so real, you can almost feel it breathe!
Breyer Animal Creations® began as the Breyer Molding Company, a Chicago, Illinois-based plastics manufacturing company. Its first model horse, the # 57 Western Horse, made its appearance in 1950.
Breyer's Traditional Size Models are sculpted 1:9 scale.

Save this product for later